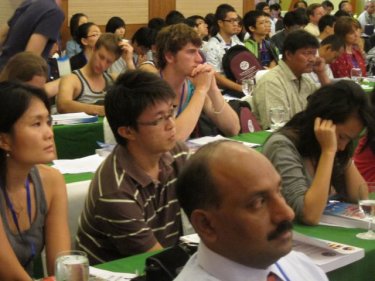 On Tuesday, many of them will dive off the reefs themselves, before returning to talk more about the problems that are assailing coral reefs throughout the region.

Phuket Vice Governor Treerayut Eamtakul said today that with so many difficulties to be surmounted to protect the Andaman’s coral reefs for the future, it was timely and useful to have experts from 35 countries offering up their ideas.

The symposium is being held at Royal Phuket City Hotel until Thursday, with the dive trips and mini-symposiums occupying the experts’ time. ”Phuket will be delighted to hear what these experts can tell us,” the vice governor said.

It’s only the second symposium of its kind – the first was held four years ago in Hong Kong. Associated Professor Put O. Ang jr of the Marine Science Laboratory at the Chinese University of Hong Kong told Phuketwan today that the South China Sea and surrounding area was the richest in the world for coral reefs, marine creatures and plants.

But it was a struggle to ward off destructive fishing methods, sedimentation and deforestation, which were responsible for a general deterioration of the marine environment.

”Eventually this affects the livelihood of people who depend on the reefs,” he said. Bleaching caused by the extra heat of global climate change is the latest challenge. ”If the corals die, the whole system will collapse,” he said.

Dr Thamasak Yeemin, chair of the symposium organising committee and a Professor at Ramkhamhaeng University, said some 40 to 50 percent of Thailand’s coral reefs had been affected by bleaching.

”We can’t control the temperature of the water but we can control the number of divers,” he said. ”Other effects from run-off and fishing can also be managed,” he said.

Quality of the coral reefs was the key, he said. ”The reefs are vital for the tourism industry, on Phuket and around the world,” he added.

Poseidon Dive Center
4.9
Based on 59 reviews

Craig Ritz
23:20 02 Mar 20
With Poseidon, the trip was easy to schedule. Dan was awesome. Good safety briefing and they put divers at ease. Lots... of good food and you were free to move about the boat. I dove with Andy. It was a blast. He showed us some really cool aquatic life and swam through some rocky tunnels. Highly recommend Poseidon!read more

Philip Shear
11:33 15 Nov 19
A great outfit with a lot of integrity. I recently fun dived with Poseidon. Daniel and his crew did a splendid job. The... dive guides are great and the company is very active in local conservation initiatives. The boat is very comfortable and the SCUBA gear is in excellent condition. We had two very good dives around the local islands. I would definitely return to dive again.read more

Rosa Rot
17:59 14 Nov 19
Good and responsible minded Dive School. the Equiment ist fine and Works perfect.The Owner Daniel ist a friendly and... nice Guy, a very good Guide and a fantastic underwater photographer. During the dives i feel very Safe and have a lot of fun. Also the Boot is in a really good and clean condition. I can really recommend this Dive School. For me the Best in South Andaman Coast.read more

Paul Aeschlimann
13:23 29 Oct 19
We, a group of 3 people, begun diving at this diving center in early 2017. Andy was our instructor and we made the CMAS... 1 Star course. After the thought us about the gear, we did our first "dive" in a pool. I found this a very appropriate location for the first diving attempts since it was familiar to me. This and due to the very good instructions by Andy, I was able to eliminate all concerns I had for good reasons. We have been told that possible problems could be solved the fastest underwater and there is no need to go to the surface immediately. These good explanations where very helpful and way more effective than just some information like that it might be dangerous if one does an uncontrolled ascent to the surface.Andy was always there when one of us needed some help, be it due to bad bouyancy or the like. Furthermore, he brought in just the right balance between sedateness and seriousness.The other dives of the course we started from the boat. They were also very nice and we already could begin seeing and enjoying the underwater life. What is not the expectation I had when doing this course but made me very happy as well was the extremely delicious Thai food they brought to the boat. This was a very nice side-effect and a good opportunity to get to know the Thai kitchen better.For the final exam, we were at the diving center and met Daniel, it's owner. He is also very kind and well experienced. We had a really great time with him as well.read more

Maximilian Prußky
10:51 27 Mar 19
Wonderful Trip to Phi Phi from Ao Nang. We really enjoyed our dive experience with Daniel and Andi and the crew! We... had two great dives in small groups, breakfast and lunch on board and a great time on the sundeck. Highlight of the trip was the discovery of a wonderful colorful turtle. We can really recommend the Dive center! Nicole&Maxiread more

R M
16:20 02 Feb 19
I did my CMAS* Open Water license here and I am very happy with the experience. Everybody was very friendly and my... instructor did a great job with explaining the theory and making the dives exciting. 5 dives are included in this course (as opposed to 4 in PADI) and all of them were very enjoyable. I already did a Discover Scuba Diving session at another place and was familiar with equipment and moving underwater, so the pool sessions were skipped. We practised some of the very important skills to ensure safety underwater but I also got to see a lot of the marine world and plenty of fishes and other animals. (lionfish, murays, lobsters, sharks, boxfishes, clownfishes.....).There was a little theory test on the second day, which wasn’t to hard because most questions can be answered with common sense. Food and drinks on the boat were good and the scenery was also amazing (see pictures below). I recommend Poseidon to anyone who wants to learn diving while also seeing a lot. It’s also lot more exciting than snorkelling :)read more

Anton Lindén
12:02 20 Jan 19
Brilliant first diving experience with a great instructor & crew! We felt safe the whole time, while we also got great... institutions and training before diving!Me and my friend tried diving for the first time and we loved the experience! We spoke to every diving company in Ao Nang, but this seemed like the best one! And we don’t regret it!We are very pleased with the day that included breakfast, lunch, snacks & free soft drinks!Love it! Thanks!read more
Next Reviews

We've removed all the abandoned fishing net on a p

Corals are an important part of our Reefs! Unfortu

Never seen phi phi let island that empty. This was

Yesterday one of our groups found an abandoned fis

Because it's #WorldWildlifeDay today! Here is a be

We don't throw our old wetsuits away we recycle/up

On the way #ocean #boating #scubadiving

Full moon over Ao Nang. Seen from the ocean. #full

Happy new year to everyone! #happynewyear